Trend set by Doordarshan in the 90s has been continued by satellite channels like Asianet, Mazhavil Manorama and Amrita TV

The love for humour and satire among Keralites goes back centuries. From traditional artforms to films, the humour element has been inseparable for a Malayali.

While artforms like Chakyarkoothu and Ottamthullal focused on humour and sarcasm, films made in the comedy genre turned out to be major blockbuster hits. The 1980s and 90s were considered as the golden era of Malayalam movies and political satire movies like ‘Panchavadipalam’, ‘Sandesham’ and ‘Vellanakalude Naadu’ were also released around the same time. Movies like ‘Nadodikattu’ and ‘Varavelpu’ have also dealt with social problems like unemployment, trade union issues with a pinch of humour.

The comedy genre in the Malayalam Television industry goes back to the Doordarshan days and has only grown and flourished with the entry of satellite channels. Doordarshan telecast comedy serials like ‘Punnayka Vikasana Corporation’, ‘Pakida Pakida Pambaram’, and ‘Narmapuranam’ during the 90s and early 2000s.

Asianet, the first private channel in Kerala, launched a comedy show ‘Cinemala’ as one of their flagship programmes. ‘Cinemala’, which was launched in 1993, presented a comical representation of the then current events taking place around the world. It ran non-stop for 20 years on the Television screens of Malayalis. ’Munshi’, broadcast on Asianet News since 2000, is another political satire television programme and it has completed over 6,500 episodes so far.

These shows have provided opportunities to emerging artists to exhibit their talents.  In the late 1980s Mimicry started gaining popularity in Kerala entertainment space. In these mimicry shows the artists imitated the sounds of film stars, performed comedy skits etc on stages in different parts of the state. With the entry of private channels, the mimicry artists found a way into performing on Television screens, which helped them gain more popularity among a mass audience. Few of these artists migrated to the Malayalam film industry, Malayalam actor Dileep gained popularity through the ‘Comicola’ television comedy series in Asianet.  National award-winning actor Salim Kumar has also performed in ‘Comicola’ during his initial days as an artist. Suraj Venjaraoodu, another national winning actor, shot to fame with a comedy show named ‘Jagapoka’ on Kairali Television.

Asianet set a trend again in Malayalam GEC space in 2009 with the telecast of Comedy Stars - a reality show in which comedians performed different types of skits based on various topics concerning the society and the best performer was awarded.

In the recent past, more comedy programmes like ‘Aliyan Vs Aliyan’ of Amrita TV, ‘Comedy Utsavam’, ‘Uppum Mulakum’ of Flowers TV, ‘Thakarppan Comedy’, ‘Thateem Muteem’, ‘Marimayam’ of Mazhavil Manorama, Asianet’s ‘Comedy Stars’, ‘M80 Moosa’ of Media One did turn out to be popular along with the daily soap operas.

Speaking on the recent trends in the comedy genre, Reghu Ramachandran, Senior Vice President, Asianet said, “Malayalam is a language which has rich content and great scripts, be it in terms of movies or television shows. Malayalis are famous for their sarcastic and witty nature. Asianet was the pioneer of comedy skits and satires in the Malayalam GEC space. ‘Cinemala’ dealt with current affairs. The sarcastic skits and shows on politicians and other public figures were presented  in the TV space and it was well received by the audience, and even the public figures who were mocked at enjoyed these kinds of shows.”

“The hero of these shows are definitely the scripts which deal with fresh topics. We have a huge talent base in the state. Currently, the comedy genre occupies 24 to 25 hours of screen space in the Malayalam GEC channels in a week,” he added.

Anil Ayroor, Programme Head and COO Flowers TV, said, “Kerala is a very literate state and so the programmes being telecast should also have some set of standards in terms of TV viewing pattern. Comedy has a huge potential in Malayalam compared to other languages because of our social background. We are a set of people who take things in the sportsman spirit when it comes to sarcasm and mockery. The politicians of the state are mocked through various skits and comedy programs, yet they take it in a sensible and most welcoming way.

“Another major reason why comedy has been gaining popularity is because after a tedious day some relief in the form of entertainment is required for the viewers. Our programmes like ‘Comedy Utsavam’ and ‘Uppum Mulakum’ have good ratings in terms of viewership. ‘Uppum Mulakum’ is more like a family show and caters to all age groups. Apart from good number of TV audience, we get a huge response on our digital platforms as well ”

Siva Mohan Thampy, Programme Head, Amrita TV said, “Sitcoms and comedy programmes have a huge acceptance since the Doordarshan era. Comedy is one genre which is enjoyed by all age groups. Our programme ‘Aliyan Vs Aliyan’ gets a good response from the audience. The characters from the serial represent real-life characters. We get responses and suggestions from the audience in terms of script for the serial. The audiences even provide us stories from real lives to be depicted in the serial. A panel of 6 to 7 members are filtering the story lines and it will soon be aired in the channel.”

Vimal Raj, Client Leader, Group M said, “The Digital penetration and emergence of OTT platforms have brought down the numbers of TV viewing audience. The TV serials with complicated and negative contents are dragging the youth away from the TV screens. In my opinion, comedy shows cater to all age group and the trend is followed by all Malayalam channels.”

Krishna Kumar, Consultant at Kerala Vision Channel Broadcasting said, “Comedy has always played a vital role in terms of content in Malayalam GEC space. Shows like ‘Cinemala’, ‘Comicola’ of Asianet had huge popularity in the early 90s. At times, the content of the comedy programmes had an element of sexism or dual meaning in them, but there are a set of viewers for that as well.”

There have been a few shows that cater to a particular region in Kerala. The characters in ‘M80 Moosa’ of Mediaone channel speaks in the Malabar region (northern Kerala) dialect and due to this has gained huge popularity among the northern Kerala viewers.

Programmes like ‘Uppum Mulakum’, ‘Aliyan Vs ALiyan’ and ‘Thateem Muteem’ cater to the family audience. ‘Uppum Mulakum’ has a wide reach in the Digital space. They garner million views in YouTube and the social media pages.

When asked about the challenges faced by the comedy genre programmes, all channel representative spoke about a common challenge, the availability of good and fresh scripts.

Anil Ayroor said, “The scripting for the comedy programmes remain a major challenge. Getting the right talent to write scripts who understand the pulse of the viewers is a challenge. We keep improving our content to cater to all age groups.”

Ramachandran is also of the same opinion: “To find the right talent to act in these comedy shows is a challenge. Fresh and topical scripts remain another challenge.”

“ The brands are willing to invest in major comedy shows because the shows cater to all age groups, hence high probability of brand reach. But at the same time, the channels should make sure that skits with innuendos and sexist remarks shouldn’t be encouraged,” said an industry expert from Kerala.

A senior media planner based in Kerala said, “Brands are too investing in comedy programs across major channels. Most of these shows will have title sponsors like telecom service providers, jewellery and mobile phone brands. Some of the shows appear in the Top 10 programme list of BARC too. The comedy genre has future in the Malyalam GEC category, provided quality on content is not compromised.”

As per BARC data: 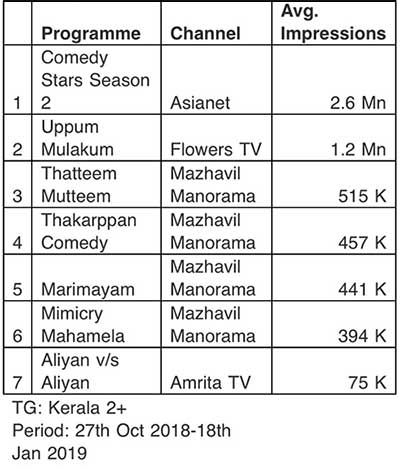