Vodafone-Idea merger: What will be Jio's next move?

The recent Vodafone-Idea merger is believed to have more than doubled the subscriber-related incentives offered to retailers. The big question now is: What will be the next move of two-year-old Jio?

Two years ago, when India's richest businessman Mukesh Ambani launched Reliance Jio, the Indian mobile industry was thrown into a turmoil. With an audacious free service for the rest of 2016, followed by vastly cheaper data plans and free voice calls for life, Jio had hit the right chord. It still continues to do so with JioPhone, a 4G feature phone for the masses.

Jio forced rivals to dramatically slash their tariffs to retain their users. Also, its customer acquisition strategy helped it grow its 4G subscriber base to 215 million in just a little over a year-and-a-half of its existence.

However, the recent Vodafone-Idea (VI) merger is believed to have more than doubled the subscriber-related incentives offered to retailers. As the war for customers intensifies, the merged brand has thrown down the gauntlet at rival Reliance Jio Infocomm. So the big question now is: What will be the next move of the two-year-old disruptor? 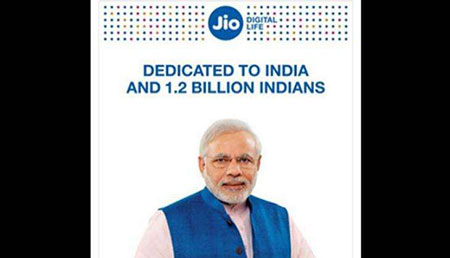 A day after Ambani kicked-off his company’s ambitious telecom venture, India woke up to full front-page advertisements. By evening, the television advertisements had started. A ninety-second clip comprising images of India’s most famous icons: Swami Vivekanand, Mahatma Gandhi, Rabindranath Tagore and Mother Teresa had hit the screens. This gave way to a video showing a portion of Prime Minister Narendra Modi’s Independence Day speech that year, where he spoke of his government’s Digital India programme and how it will uplift India. The final portion of the video linked Reliance Jio’s aims specifically with Digital India, and said how the service will connect India’s 1.2 billion people with free voice calls.

The video looked clever, with no specific talks of a product or product launch. The brand tried to play it off as a dedication to Digital India. And from then on, Reliance Jio has undertaken an aggressive marketing strategy to create positive brand awareness. It has launched ad campaigns on television, radio, newspapers, magazines, billboards and social media platforms including Instagram, Facebook, Twitter and YouTube. It knows the importance of star power and has roped in several celebrities to act in its commercials and be associated with its brand.

Bollywood actor Shah Rukh Khan, who is also the brand ambassador of Jio, kickstarted the launch event which took place at Reliance Corporate Park in Navi Mumbai, along with other celebrities such as musician A R Rahman, actors Ranbir Kapoor and Javed Jaffrey, and filmmaker Rajkumar Hirani.

The brand then launched Jio Football, featuring seven film actors and 29 footballers which was a follow up of last year's 'Jio DhanDhanaDhan' campaign. This was Jio Studios' first major campaign for the teleco. Then Bollywood actress Deepika Padukone was talking up India’s dominance in mobile data in an IPL special Jio campaign, making it the second most visible brand on television.

According to recent rumours, Reliance Jio Infocomm (Jio) and US-based Cisco Systems are likely to extend their partnership to tap the ₹50,000-crore strong enterprise market with services portfolio that the Mukesh Ambani-owned telco plans to launch shortly. With the recent merger of Vodafone India and Idea Cellular, it looks like the new entity too is now preparing to tap into the ₹50,000-crore strong enterprise market pie dominated by Bharti Airtel and state-run Bharat Sanchar Nigam Limited (BSNL).

Anita Nayyar - CEO India & South Asia - Havas Media Group, opines that while the Vodafone-Idea merger will create a strong competition, the category thrives on consumer benefits and that’s where the comparisons will happen between Jio and VI. “Reliance has always created a disruption in the market place, whether when they launched Garden Vareli or when they launched Jio. Jio is tuning out to be a strong brand given the exposure and the consumer benefit it is offering,” says Nayyar.

Ashish Mishra, MD, Interbrand India, an agency that worked closely with Reliance to define and design brand Jio, opines that Jio has been strategically created to be a lot more than a telecom brand. And so, it’s comparison to another telecom brand is unfair. Mishra believes that a strong offering emerging in the sector will challenge the duopoly of the two leading brands in the market, Jio and Airtel.

“The telecom wars will have to be fought at two polarised ends of the value chain: for broad-basing and still optimising penetration and beginning to create a premium for viability. Technology and value will thus be the drivers,” he lets out.

Borja Borrero, Executive Director, EMEA & Latin America, Interbrand, who has also briefly worked on brand Jio, says that he was challenged by the brief to them. Borrero was involved in sourcing the international creative team in creating the brand identity. “The first thing with Jio was that we wanted to create an international creative team to work with the brand because we wanted to create one iconic brand for India that can be a disruptor and be relevant even beyond the boundaries of India. The brand wanted to change everything in no time. So we had to be agile, flexible and very fast,” he reveals.

Vineet Sodhani, CEO, Spatial Access, feels that the merger is relatively small and quite preliminary in the overall context of the industry and its potential. He sees it as a 3C game of carriage, content and commerce. “We are largely discussing carriage here. Brand recall for Jio remains high with regular investments on media properties and it will take time for the Voda-Idea merger to settle anyways. Furthermore, Jio feature phones are the new growth drivers for the brand which will help keep  the brand recall high,” he shares.

Mishra points out that as regards to Vodafone-Idea, they still have to work around the natural conflicts of two cultures coming together-- of sorting out their overlaps and complementarities-- which would define how they will be architected together. He contends that due to an extended merger time-frame, there’s been uncertainty around both these brands which surely would have affected their brand values.
“While Idea was championing democratisation at the lower end, Vodafone had an edge on the premium side. So they have a potential to complement each other and be a complete portfolio in the sector. Jio, on the other hand, has been designed to play at both the ends as a single brand. Unless the play at the premium and technology end is made the hero for the brand, the prevailing subscription game will result in the Reliance’s image of value getting reinforced. So it’s a fairly evenly poised match with less room for error, going forward for both the players,” he says.

Brand expert Gaurav Gulati feels that the merger of Vodafone and Idea will build a brand that is for everyone.

“Vodafone as a brand is known for its marketing and advertising magic and now has a power of two. Vodafone has a stronger reach in urban areas whereas Idea has reach in rural areas. This combined positioning and unique brand identities will build a brand that is for everyone and has a broader reach,” he says.

Purpose is what makes the organisation: Anurita Chopra, Haleon
1 day ago

Rama Paul moves on from ABP News Network
22 hours ago

Find the job that is perfect for you, says Monster as it rebrands as FoundIt
1 day ago

Precious like the people we love: Ferrero Rocher rolls out Christmas campaign with Hrithik
1 day ago

For those who take their sleep seriously, says campaign for Duroflex Wave Plus
1 day ago

marketing Purpose is what makes the organisation: Anurita Chopra, Haleon
1 day ago