Expect even more serious marketing initiatives as Samsung will now look for dominant position in the country where it is presently ranked second with a market share of 26. 2 per cent

On Monday, after the inauguration of the world’s biggest mobile factory by Prime Minister Narendra Modi and South Korean President, Moon Jae-in at Noida, for Samsung, there have been speculations about the impact of this launch on domestic mobile players and its contribution to the government's ‘Make in India’ initiative.To share some figures, the newly inaugurated Samsung factory in Noida will have the capacity to manufacture 120 million smartphones per year and will make everything from low-end smartphones to the company's flagship models. It must be mentioned here that India is already the world’s second largest smartphone market after China and as per a recent study by Cisco, India will be home to over 780 million smartphones by 2021.
According to Saurabh Uboweja, International Brand Expert and CEO, Brands of Desire, “Samsung's new plant is an indication of India emerging as the mobile phone manufacturing hub of the world. It's a positive development given that it will create a few hundred thousand direct and indirect jobs. A slew of other global manufactures have also committed to invest extensively in creating large capacities to cater to not only India's mobile consumption but also as a dominant exporter to all markets.”
If we look at the top selling mobile phone brands, the Indian mobile market is dominated by foreign players with Chinese manufacturer Xiaomi commanding a market share of 31.1 per cent, while Samsung is presently ranked second with a market share of 26. 2 per cent. The share of local players such as Lava, Micromax etc. has significantly dipped over the years, and with Samsung inaugurating the world’s biggest mobile manufacturing unit, the big question is: will it mark the end of road for Indian mobile manufacturers?
Speaking about the impact of Samsung's latest move, Sanjeev Agarwal, Chief Manufacturing Officer, Lava International Limited, shrugged off any threat to local players and said, “It's a great initiative for the industry. This will surely attract more investments towards establishing components ecosystem in the country as well as strengthen device manufacturing. Furthermore, this will enable establishing a more robust mobile manufacturing ecosystem in the country.”
On the other hand Samsung believes that this move will further strengthen India’s commitment to the ‘Make in India’ mission. In a press statement, HC Hong, Chief Executive Officer, Samsung India, while describing the big move, said, “Our Noida factory, the world’s largest mobile factory, is a symbol of Samsung’s strong commitment to India, and a shining example of the success of the Government’s ‘Make in India' programme. Samsung is a long-term partner of India. We ‘Make in India’, ‘Make for India’ and now, we will ‘Make for the World’. We are aligned with Government policies and will continue to seek their support to achieve our dream of making India a global export hub for mobile phones.” 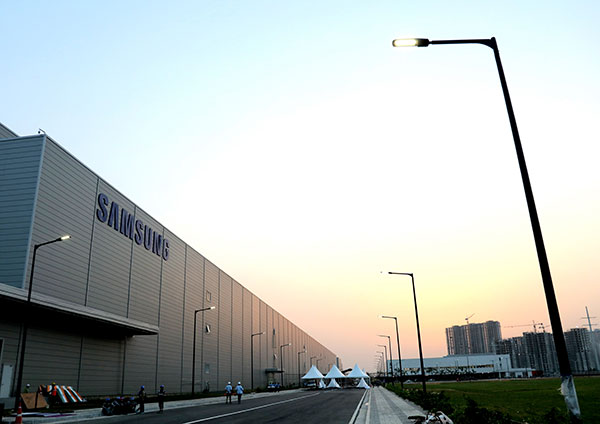 These words are also echoed by Dr. Himadri Das, Director Management Development Institute, Gurugram. According to him, “Samsung launching a new manufacturing plant in India is a big impetus for the ‘Make in India’ initiative. This will help develop high precision and global quality manufacturing competence in India. This will also give a fillip to promoting high end technical training facilities that are a necessity to ensure the availability of the high quality of workforce required for such world-class manufacturing.”
The ribbon-cutting ceremony to mark the start of manufacturing at the new factory was also attended by the Chief Minister of Uttar Pradesh, Shri Yogi Adityanath, Minister of Commerce and Industry, Shri Suresh Prabhu, and other dignitaries from government and industry. Senior executives of Samsung Electronics, including Vice Chairman Jay Y. Lee, Vice Chairman BK Yoon and, CEO and President of IT & Mobile Communications DJ Koh, were also present.