Conceptualized and executed by Tonic Worldwide, the Aditya Birla Group has reaffirmed its commitment to the environment by helping consumers identify their fears for the environment and act upon it

This World Environment Day, Aditya Birla Group takes a step further towards cementing its commitment to sustainability by initiating conversations around our biggest fears about the environment. This year, keeping up with United Nations theme of ‘Air Pollution’, Aditya Birla Group has pledged to create artwork out of toxic air and to support the cause they have also planted over 1 million saplings across the group. The campaign focuses on the adverse effects of air pollution and how it affects everything around us - from heritage monuments and wildlife to human health and flora & fauna.

The campaign features four eco-conscious influencers from different walks of life, who talk about the adverse effects of air pollution and their biggest fears about the environment. They include renowned influencers – heritage enthusiast Akshay Shetty, wildlife photographer Nishank Joshi, fashion designer Jeena Gupta and environmentalist Sumaira Abdulali. Each of them shares their unique stories and their take on the future that awaits Mother Nature. 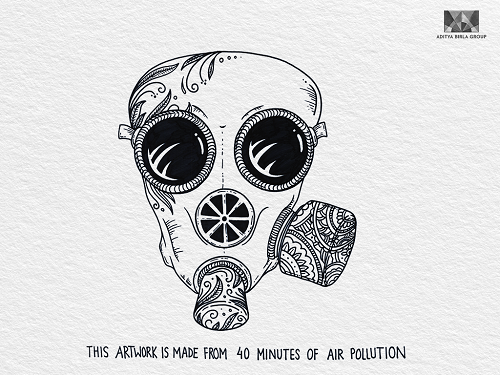 At the end, each of their fears is presented in the form of sketches made by Air Ink, the first ink made from recycled air pollution. The underlying message is to urge people to fight air pollution by extracting the best out of the worst.

Talking about the pledge, Chetan Asher, CEO, Tonic Worldwide, said, “For An issue like Air Pollution we need a stark reminder every now and then. As it needs collective action to combat, this simple campaign using a simple innovation aims to do just that by manifesting the effects of pollution with Ink made out of the toxic cocktail that we breath.”
Talking on innovation of the campaign, Pratik Hatankar, Head of Innovations & New Initiatives, Tonic Worldwide, said, “#FilterTheFuture is a fusion between technology, science and art. We have used Air Ink as a symbol to remind people the effects of air pollution can do to various aspects of life.”

We got 100X value back with our investments in Ramayan & Mahabharat: R S Sodhi, Amul
1 day ago

e-Content Jam: 'Give relevant and good content to audience, they will surely engage'
1 day ago

e-Content Jam: ‘Ethical marketing to be key in post-COVID times’
1 day ago

e-Content Jam: Why influencers have become crucial for brands in lockdown
1 day ago

Sakal Times & Gomantak Times to shut down operations
4 days ago