The ad introduces the soon to be launched feature - Suspicious Link Detection - which will be rolled out this week.

Whatsapp kicked off a print ad campaign in national newspapers on Tuesday listing out tips to fight fake news. The app has lately come under fire for propagation and proliferation of fake news.

With the ad, Whatsapp puts the onus on community members to check for fake and incorrect information. In the ad Whatsapp says that technology companies, the government, and community groups must come together to fight fake news. “If you something that’s not true, make people aware and help stop the spread,” the ad says.

The ad introduces the soon to be launched feature - Suspicious Link Detection. According to the ad, the feature which is still in a beta testing will be rolled out this week.

As per a post on WAbetainfo.com when the new feature is active on Android phones Whatsapp will analyse links received in messages to detect if the link redirects to a fake or alternative website. If WhatsApp detects a suspicious link, the message will be marked with a red label, indicating to the user that the link is suspicious. 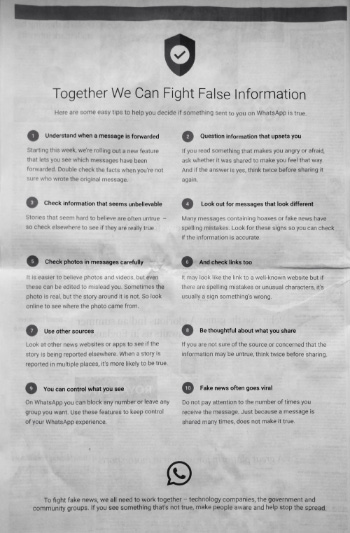 The ad tells users of Whatsapp to double check information, images, links that they receive on Whatsapp. Whatsapp also asks its users to “be thoughtful” about what they share on the app in the ad. “Do not pay attention to the number of times you receive the message. Just because a message is shared many times, does not make it true,” says the ad in the last tip.

WhatsApp’s ad follows the recent lynching incidents sparked by rumours of child lifters on social media. The government has urged Whatsapp to take action against misinformation circulating on its platform in India. IT Minister Ravi Shankar Prasad, has called on Facebook’s Whatsapp to take “necessary remedial measures” and “immediate action” to curb the flow of unverified information. Conveying the government’s “deep disapproval” he said that the company cannot evade “accountability and responsibility” when its users spread false information.

There will be no pay cut or lay-off at ThePrint: Shekhar Gupta
1 day ago

Do #GoodForEarth says Oriflame on World Environment Day
8 hours ago

e4m MarTech Fridays: Data has to be a subset of your business strategy: Experts
23 hours ago

Return of channels to DD Free Dish will bring fair play in market: Experts
2 days ago

Will Google’s interest in Vodafone create the next big tech-telecom partnership in India?
6 days ago