According to the report, which studies how digital news is being used in India, 68% of respondents identify smartphones as their main device for online news and 31% say they only use mobile devices for accessing online news. These figures are markedly higher than in other markets, including developing ones such as Brazil and Turkey. 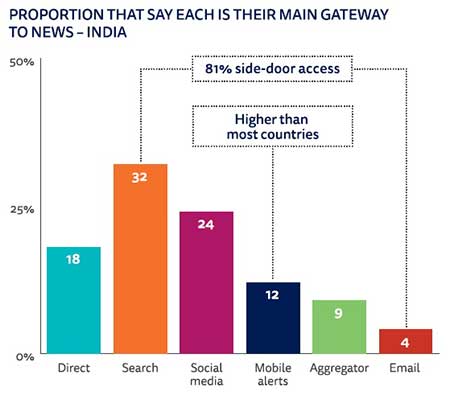 Within social media, Facebook and WhatsApp are particularly widely used, with 75% of the respondents using Facebook (and 52% saying they get news there), and 82% using WhatsApp (with 52% getting news there). Other social media platform widely used for news are Instagram (26%), Twitter (18%) and Facebook Messenger (16%).

Other key findings of the report:

Navigating news on social media: 56% of respondents say they decide on the basis of who shared the post, while for 63%, the headline is very important, and for 58%, the brand. 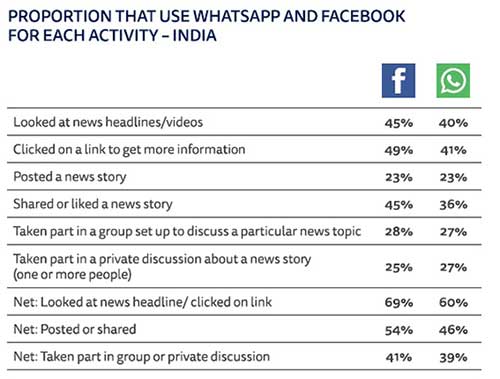 WhatsApp widely used for news: 82% use the messaging application, and 52% reported getting news on WhatsApp, far higher numbers than most markets in Europe and North America, but comparable, for example, to Brazil.

Online and offline sources of news: Among the respondents over 35, online (38%) and television (34%) are about equally widely named as the main source of news, and print (27%) still more widely relied on than social media (19%).

Legacy brands popular with online news consumers: NDTV (56% offline, 47% online) and The Times of India (46% offline, 40% online) are far more widely used among our respondents than any other brands. 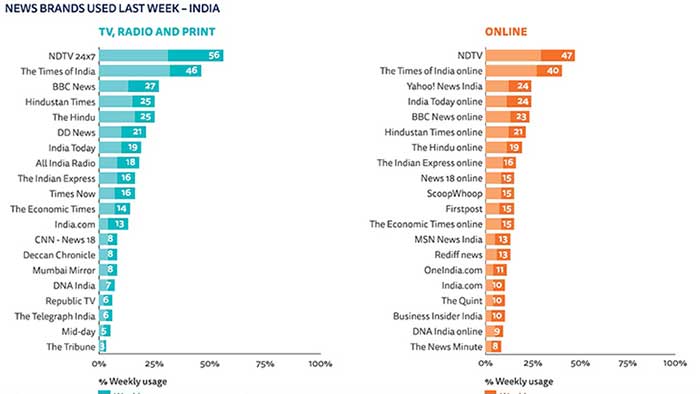 Appetite for online news video:  35% of respondents say they would like to see more online video news. 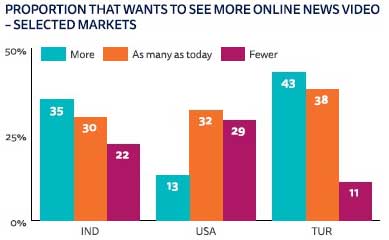 Ad-blocking:  Even though many publishers have taken steps to tackle ad-blocking, a third of respondents continue to use ad-blockers.

Opportunities around voice-activated speakers and audio: 9% of the English-language internet user respondents say they currently use a voice-activated system, and more than half of these (5%) use them to access news.

The report surveyed 1,013 individuals in the month of January 2019 who consumed news online in the past one month.

“The sample is skewed towards male, affluent and educated respondents” says the report. The sample is reflective of English-speaking population in India that has access to the internet. “As an online survey, the results will further under-represent the consumption habits of people who are not online (typically older, less affluent, and with limited formal education).”

The study has been commissioned by the Reuters Institute for the Study of Journalism, sponsored by The Hindu Media Group,  The Quint, The Indian Express, and the Press Trust of India and was conducted online by YouGov.

Google struck down 1.54 lakh pieces of content in May, June in India
23 hours ago

Nazara turns profitable in Q1 with consolidated PAT of Rs 13.6 crore
23 hours ago

Google struck down 1.54 lakh pieces of content in May, June in India
23 hours ago

digital Google struck down 1.54 lakh pieces of content in May, June in India
23 hours ago