S4 Capital a peanut in comparison to WPP, but yes, people have peanut allergies: Sorrell

Sir Martin Sorrell delivered a talk at the Lumiere theatre, the biggest auditorium at the Palais des festival, which got packed within minutes as people flocked to listen to the ad guru

Despite all the controversies surrounding him, when Sir Martin Sorrell speaks, everyone listens. Case in point is his recent talk at the Cannes Lions International Festival of Creativity where the Lumiere theatre, the biggest auditorium at the Palais des festival, got packed within minutes.
Sorrell, who was in conversation with writer and author Ken Auletta, said the need for him to start a new company comes from client demand.
“I say it on the basis from what I hear from clients. For example, if you and I were starting a company, you listen to the most prominent CMOs that you’ve mentioned in your book, Mark Pritchard of Procter and Gamble, or Keith Weed of Unilever and you listen carefully to what they say, and what the people who work with them say. They want agencies which are much more flexible, faster, cheaper; agencies who are more global, local, who can relocate with them and agencies that can deal with local clients, as well as the millennial influencers,” said Sorrell.
When asked that with all the knowledge and experience that he has, if he is now starting his new company called S4 Capital to take on WPP, Sorrell called his new company a ‘peanut’ in comparison to WPP. 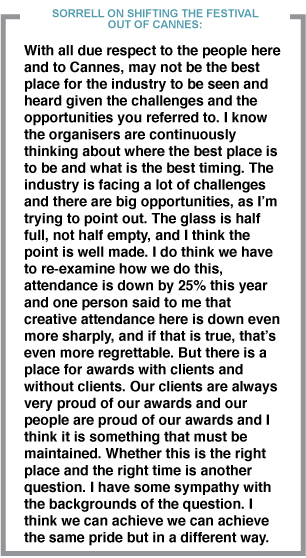 “S4 Capital of which I am Executive Chairman, is a peanut in comparison, but I do have to admit that some people have peanut allergies,” said Sorrell, leaving the audience laughing for the next few seconds.
During a session filled with Sorrell’s sharp wit, there were also a few moments of serious silence when the media guru was confronted with all kinds of allegations floating around him.
Auletta asked him to explain the circumstances under which he was compelled to leave WPP. He was also confronted with allegations of being ‘verbally abusive and cruel to people in the office’.
“Am I an easy person to deal with? No. Am I demanding? Yes. I don’t think that was fair. I think I demanded high standards. I don’t know who The Financial Times spoke to. They claim they spoke to 20- 25 people, maybe they spoke to the wrong 20 or 25 people. I said over the last 6 or 7 weeks I received numerous emails (from WPP colleagues) and maybe one of the things I should do is publish those emails that I received which would contradict what you just said,” Sorrell responded.
Countering most of the allegations against him including that of financial and personal misconduct, Sorrell said he has responded formally to everything.
Finally coming to the question of why did he leave WPP, Sorrell cleverly skipped giving details by saying he has explained everything to the 200,000 people in WPP in a letter.
“I explained that very simply in the letter I wrote to the 200,000 people in WPP, that I felt that the situation had become untenable for several reasons and that it was in the best interest of the shareholders, the clients and the people inside the company,” he added.
After the session with Ken Auletta, Sorrell sat down for a press conference with journalists at Cannes. Edited Excerpts:

S4 Capital is backed by millions, and in this industry do you not need more than that to make an impact?

Obviously, the more resources you have access to, the better. We started WPP with a market capital of about 1 million, Derrison has a market capital of about 2 million. We put in 53 million sterling with non-binding commitments in relation to another 170 million euros, so I think that’s a good place to start. The interesting thing about the fragmented part of the industry is that more of the players are not what I would call very large, but in relation to the previous question, the private equity industry is a very big industry raising about half a trillion dollars a year, they leverage it up by 3, 4 or 5 times and they have a lot of firepower in that industry too. We will have access to what we need in the early part and that’s the more important part. Apart from private equity, there are forces in the industry that are looking to expand their offer and diversify their approach. There is a lot of complementarity and I think it would be wrong for us to focus narrowly on the resources that you’ve identified.

Can you tell us 3 new things you’ve learnt at Cannes this week?

The first thing I’ve learnt is never do an interview with Ken Auletta, and second, never give a press conference. The third thing, everything comes back to the guardian question, if you look around at where the investment is being made, it demonstrates to me that the biggest investment here is in consulting. The consulting companies is where you see ‘boats on the quay’; you see PWC being overlooked by Accenture, if Omnicom and WPP had 2 boats next to each other, one looking over the other, I think I would be a bit worried about my investment for both. That is where the weight is at the moment and with all due respect to Ken’s book, I don’t think he brought out enough of the challenges, not on a head to head basis but in the senior reaches of the clients. They go to the clients and say: “you have a lot of technological challenges and you’re spending a lot of money, can we help you reduce that spend and our reward would be a percentage of what we save”. That is a pretty seductive message.

When you look back at the events of the last 12-18 months, do you have any regrets?

If I look at strategically where WPP is going, and I’ve said this before, all the holding companies which Ken looked at were moving in the same direction. I think the only difference is the speed at which you get to that destination. If you quickly go through them, the village concept of embracing horizontality and they done it in a slightly different way. In Ken’s session I tried to say that its an interesting model because it is very different. If you go to IPG, it’s not as pronounced but integrated but Mc Cann is almost a group a group of it own and highly integrated. Dentsu has one of the best positions, if not the best position around media, digital and data, with Publicis there is clear articulation of strategy, clearly appealing to clients when you look at Campbell’s and Marriott, they win that pitch on the simplicity of their offer. The big issue is whether they can deliver it and whether if you call everything by one brand name, the brand names they exclude in their case Saatchi, Leo Burnett and BBH, suffer as a result. The issue is as you elevate one part of your organisation, is it counterbalances by declines elsewhere. Omnicom is probably the least integrated, although as Ken pointed out, they did it with McDonald’s and to some extent to AT&T, but probably much more autonomous and independent, but certainly leaning in that direction. Back to your question about regret, the regret is probably we didn’t do more, in terms of simplification of verticals. More client or in take of work, more country management, and last, but not least, the digital underpinnings to it. the acceleration of that strategy, the question is not where you’re going, the question is the speed.

Since you set up Derrison rather quickly, were there plans to set it up earlier when you were at WPP? If you were still at WPP what would you change?

I would still carry on implementing that strategy. It about simplifying the verticals. More focus on client and country and the digital underpinning. The most difficult question is when you flip from an organisation is vertically organised where the primacy is in the global brand leaders. When do you flip it to a client and country led organisation. My view is that in time that is inevitable that you move to a country level organisation, given the changes and the growth of local brands, the growth of millennial driven, new media driven brands. The most of the companies that we are talking about, maybe Publicis is slightly different, but in all the other companies, the global brand is the primary driver. And in my view the most difficult thing is when you flip that switch to a client led organisation and a country led organisation.

Grofers pays tribute to mothers with #HeroesRaiseHeroes campaign
15 hours ago

Star tells advertisers to pay only for the IPL matches played: Report
21 hours ago