As the Pandey brothers receive the highest honour at Cannes Lions, they remember their growing up years, large family and their home being a veritable art school 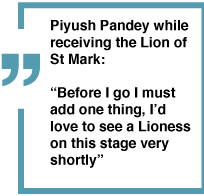 It was the moment that the Indian ad industry had been waiting for for five months. Piyush and Prasoon Pandey finally held the Lion of St. Mark award in their hands on Friday evening as the Cannes Lions International Festival of Creativity 2018 came to an end on Friday evening. Dressed in similar black jackets and wearing the flag of India brooch on their heart, the Pandeys, who have been winning hearts of millions of consumers through their outstanding ads, made a short yet powerful speech ahead of holding the prestigious Lion in their hand. 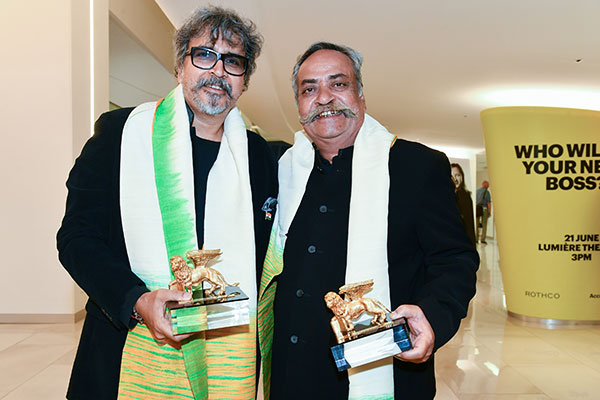 Here is what elder brother Piyush Pandey, Executive Director and Creative Chairman of South Asia, Ogilvy, who compared his life to a dream said ahead of holding the award:
“If I was to shut my eyes and rewind that dream, what do I see? I see my parents and my sister flagging me off on this run, and as I start running, I see millions of Indians cheering at me in 16 different languages. I can see at their faces that they are cheering at me, I don’t understand their language. As I go along I see a lot of wonderful clients who are handing me over bottles of water and lemonade. As I run on I see my family again, they have grown in size. Now my sisters have married and have children and grandchildren. I also see my wife with her six dogs waging their tails and she asks me to keep running. And I keep running. Along the line I see somebody running alongside. And I look from the side and it’s my brother. So we rub shoulders and we keep running. So as we run along I see a lot of Ogilvy people from India and international who are waving Oglivy flags and tell me, don’t stop. And there are also competitors, who have wonderful expressions on their faces. They don’t look like rivals, they also cheer me up. And at the end of the day I still feel like running. My heart is pumping and I look up to the sky and my parents and my two sisters whom I lost are saying, don’t stop, keep running.”
The ace advertiser further took social media by storm by making an observation that earned him good wishes and accolades from across the world. “So before I go I must add one thing, I’d love to see a Lioness on this stage very shortly,” he concluded. 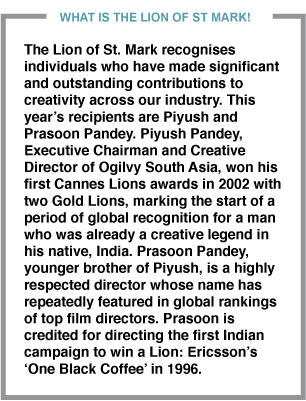 Younger brother Prasoon Pandey, director of his own production house venture, Corcoise Films, attributed a large part of his success story to the fact that he was born in a large family and a house that looked like a “cramped art school”.
“By the time Piyush and I came in, all the four corners of the house were taken up by our sisters. One was learning classical dance where another one was learning music or rehearsing lines for a theatre performance. In another corner my father was teaching someone how to recite poetry, my mum was discussing powerful women characters in literature. It was like one cramped art school where one could just not escape the learning,” said the younger Pandey.
He further went on to thank his institute, The National Institute of Design, which besides teaching him design also acted as a matchmaker as it was here that Prasoon found his love. “My wife is my best buddy and also my best critic.”
Earlier in the day in the duo had a conversation with Philip Thomas, CEO of Ascential Events, the parent company of the Cannes Lions International Festival of Creativity. The fun-filled session saw Thomas ask the two brothers about their work together and their ability to add humour to everything they do.When asked by Thomas who amongst the two is more creative, Piyush said while he would ideate, it is Prasoon who will pursue and shape the idea and give the final outcome. “Also sometimes I am kind to him as he is the youngest in the family,” said Piyush teasingly. However, for Prasoon it’s the elder brother who is undisputedly more creative of the two. “There have been times when we would sit and think about an idea for hours and Piyush will solve it minutes. When we were doing the Fevikwik ad, me and my team sat throughout Saturday morning to noon, thinking of possible ideas. Around noon Piyush came in and asked us what were we working on, and within minutes gave the idea of fisherman using Fevikwik, that later became the ad of the year,” he added.

Truecaller stands against harassment with campaign #ItsNotOk
5 hours ago

In Flipkart’s latest ad, Ranbir & Alia remind audience the joy in shopping for fashion
16 hours ago