Surrogate ads of tobacco & liquor not only illegal but also unethical, say experts

The ad industry, however, opines that the authorities should also consider curbing the root cause of the issue, i.e., the manufacture & sales of such products

Surrogate is defined as a 'substitute’ in Merriam-Webster dictionary. Surrogate advertisements are just that.

The surrogate or substitute ads are used to promote and advertise products of brands when the original product cannot be advertised on mass media due to prohibitions by the law or the guidelines of ad regulator - Advertising Standards Council of India (ASCI).

In surrogate advertisements, banned products are not projected directly to consumers but rather masked under another product under the same brand name.

Bollywood superstar Amitabh Bachchan’s surrogate ad for Pan Masala brand, which he pulled out on his 79th birthday that is October 11, has led to a debate once again over the use of surrogate ads by companies and celebs to promote unhealthy products by violating the law.

Apart from being illegal, such surrogate ads are unethical too, feel industry stalwarts like Sam Balsara, Chairman of Madison World.

“Some categories like Liquor have been forced to do it and it is debatable whether such advertising is surrogate advertising or advertising for extension brands”, he says.

Netizens have also appreciated Mr Bachchan's decision to step down as the face of a pan masala brand.

A Twitter user — @peepoye_ — wrote, "Thank u, @SrBachchan Sir! You've shown that you are indeed the 'Shenshah' of Indian Cinema! Hope the way you have terminated your contract with the Pan Masala Brand, other actors will also follow in your footsteps!"

“Advertisers and Govt Equally To Be Blamed”

Launching new products with a common brand name is known as brand extensions and is not per se illegal or objectionable in nature. The problem arises when a brand extension is carried out in response to a ban on advertisement of one product category, ad experts say.

Industry experts are also questioning the role of the advertisers and companies who indulge in such unscrupulous activities for financial gains. The pan-masala industry in India is worth Rs 45,500 crores despite an official ban on promotion and advertising.

The government and ASCI’s silence over the matter is also being debated.

Co-Founder and Chief Creative Officer, Tidal7 Brand and Digital, KS Chakravarthy, popularly known as Chax, says, “ASCI does what it can, but there are enough agencies and advertisers who are happy to operate beyond the pale. The real question is, if the authorities are serious about 'protecting the public', why do they allow surrogate advertising?”

He asks, “Why act all holier than thou about the stars? Yes, some will not do it, there are others who say, if it is legal, why shouldn't I? It is a failure at many levels, and such pointless debates miss the fundamental issue - or rather, choose to ignore it.”

Samsika Marketing Consultant MD Jagdeep Kapoor offers a broader view as he asks why are the authorities allowing the manufacturing and sales of these ‘sin products’ if they don’t want the brands to promote them. “I don't think surrogate advertising is right but people need to see and curb the root cause of it. You are allowing the manufacturing and sales of these products but then you are saying they can't be promoted. How does that make sense? Also, psychologically, people tend to move more towards things that are forbidden. So, if you ban them, the interest will go up. And if you just ban marketing, people will still see them in stores. So, the question is: are we ready to work on the root cause and completely stop the manufacturing and sales of such products? Obviously, it doesn't justify exploiting the loopholes in the system, but we need to look at it more objectively."

Three layers of law, none works

Industry experts point out that India has a triple layer prohibition:

2) Cigarettes And Other Tobacco Products (Prohibition Of Advertisement And Regulation Of Trade And Commerce, Production, Supply And Distribution) Act, 2003.

All prohibit "Tobacco and liquor products'' ads by both direct and indirect means. None of the three works though.

Since advertising has been banned in Mass Media, tobacco and liquor companies have resorted to surrogate advertising tactics to keep their brands alive in the minds of consumers.

“The tobacco and liquor lobbies are too strong in India. They are the ones which fund political parties. Hence, they get away despite flouting the norms openly. Now, they are the sponsors of the Indian Premier League (IPL) as well,” a TV actor-turned-politician said, requesting anonymity.

What will happen now?

Some industry experts avoided commenting on the issue on the record. Off record, they said that the current debate will lead to nowhere.

“Surrogate ads for tobacco and liquor will continue as stakes are high. Nonetheless, debates on this issue always revolve around actors and end when they budge to the public or political pressures,” an ad filmmaker opined.

Since the information and broadcasting ministry has not spoken on the matter, the matter is expected to subside in a few days.

ISA Global CEO Conference 2022 to focus on navigating a VUCA 2.0 World
1 day ago 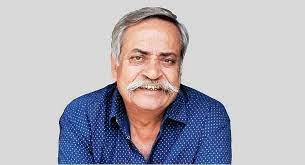 advertising When you enjoy your job, you don’t count the years: Piyush Pandey, Ogilvy
22 hours ago