Marking another successful year, Amitabh Bachchan announced the #YourHandInMine as the central theme for the 5th year of Dettol BSI. In this season the campaign will focus on driving behaviour change towards sanitation, cleanliness and health by inculcating the habit of washing hands regularly, air pollution control and working towards an ODF and hygienic India by 2019.

Children are the change-agents of the society. They tend to inculcate the learning into a habit, which influences a larger sphere around them. Therefore, with #YourHandInMine, Dettol Harpic BSI aims to reach out to children to make them key drivers in bringing about behaviour change by encouraging greater community involvement through them. Under this theme, the campaign appeals to individuals to come together and become part of a collective community action to make India clean and healthy.

Speaking at the event, Mr. Gaurav Jain, SVP,RB AMESA Health said, “Dettol BSI has been successfully creating awareness and driving behavior change for the last four years. With each passing year, the program has been able to create a positive impact with community partnerships reaching out to a wider audience. We have covered 10,000 schools, across 7 states so far and our aim is to reach 2.5 lakh schools this year. The program has added a conservative estimate of $500,000 to the national economy by reducing the cost of diarrhea and there is a significant reduction (5%) in diarrhea cases among the exposed children.Our focus for this year remains to drive behavior change with the collective effort of the community, better and effective involvement from people by encouraging and empowering individual contribution towards the larger cause.” 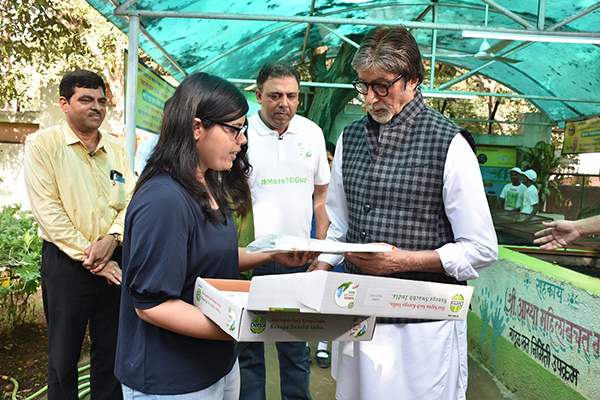 At the event Mr. Bachchan was presented with special Dettol BSI Hygiene Kit by school going children that educates them about the right methods in a fun manner. Due to their exposure to our Hygiene Kits - awareness about Diarrhea amongst children has significantly increased from 66.8% to 87%.

While congratulating Dr. R.N. Cooper Municipal General Hospital for its commendable work around sanitation and cleanliness, Mr. Bachchan also emphasized on how #YourHandInMine aims to motivate people to contribute towards the Swachh Bharat Abhiyan initiative by making small efforts in their own way. He also outlined multiple steps that one can take to make their surrounding clean and hygienic.

In order to extend the reach of the Dettol BSI campaign, RB has partnered with the Associated Chambers of Commerce and Industry of India (ASSOCHAM), to reduce the effects of air pollution, particularly in northern India, caused due to the burning of agricultural stubble after the harvesting season.Through this association RB will reach out to 2, 11,000 people and 42,200 households in 95 villages in Punjab. RB has further strengthened its foray into addressing the issue of air pollution, by partnering with Global Interfaith WASH Alliance (GIWA) and Sankalp Taru. It has successfully planted 30,000 trees in Rishikesh as part of the Tree plantation drive which aims to plant over 200,000 trees in Dehradun, Uttarakhand.

As part of continued efforts by RB to improve sanitation and hygiene, the company has built 17,000 toilets out of the 25,000 toilets it aims to create through people participation. It also partnered with Ministry of Urban Development (MoUD) to launch the ‘Toilet Karenge Search, Toilets Rakhenge Swachh’ campaign that focuses on encouraging citizens to use Google Maps to locate public toilets, and share their ratings and reviews after using them. RB has committed to be the behavior change communications partner to spread awareness and dissuade people from defecating or urinating in the open, through this social campaign.