After a decade Jhala steps down as the CEO of BBDO India, we speak to the veteran adman about his 30-year-long journey in the industry

Within the first five minutes into our conversation, Ajai Jhala, one of India’s gifted advertising veterans and Chief Executive Officer of BBDO India, makes an interesting statement: “We do the best creative in a rather collaborative culture”. 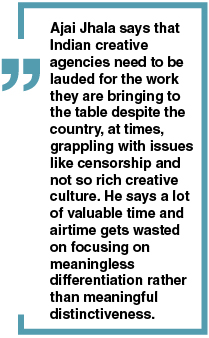 No wonder that BBDO India has bagged every perceivable award and global recognition. And of course, it got home the Grand Prix- the stuff of folklore.

Jhala, one of the forces behind the success of the agency, recently stepped down as its CEO after dedicating 10 years to establishing its India business and working on some of the most iconic campaigns such as ‘Share the load’ (Ariel), ‘Release the pressure’ (Mirinda), among others.

Jhala, who is now serving his notice-period at BBDO India, says, “10 years of BBDO has been an incredible journey. It was a difficult but rewarding one and we're glad that we have been doing great work. We’ve built something new in the India market.”

Before BBDO India, Jhala was at Lowe Worldwide for six years as Global Communications Director for Unilever and was based in London, Paris and New York. Prior to Lowe, he served as a Planning Director at Ogilvy & Mather, New York.

When we quizzed Jhala on his decision of stepping down and where he is headed to, he shared that he is taking a break to be with the nature. “I’m moving from this very collaborative culture to agriculture,” he quips, and we share a laugh.

Jhala reminisces his journey of creating a concept for BBDO in India. “When we came to India, for most people, the agency was just four letters and a US company. Although it was well-established globally, it didn’t have a meaning in the country. This was a time when a lot of agencies were launching,” he opens up.

The CEO believes that what really worked out for the agency was their approach of creating powerful ads in social contexts.

As we ask the adman what was the general mood of advertising when he started off, he says it was almost 30 years ago when advertising was probably not as relevant.

“To me, advertising really began with the entry of Nirma. Because before Nirma, you just gave the consumer what you produced. And I believe that it was marketing that created brand Wheel. It was the first campaign that truly delivered the marketing message,” says Jhala who reveals that his first campaign as a trainee was Surf Lalitaji.

“I feel so lucky to have come at a time when marketing and advertising began and it was truly needed. Back then, it wasn’t about nice headlines and pretty-looking models. While the work then wasn’t extraordinary, you weren’t pushed against the wall by a competitor who blind-sided you,” shares a nostalgic Jhala

“A lot of our ads have championed social-disobedience and is contrarian to what others do,” he continues.
Jhala suggests that award juries need to look at the marketing context of an ad campaign while judging it. “There are times when the jury is raw and they tend to award work without understanding the marketing context of a campaign,” he contends and shares how Indian juries didn’t award Ariel's 'Share the load' as much as the global juries did.

When we speak about the good and the not-so-good aspects of Indian , Jhala goes on to explain that Indian creative agencies need to be lauded for the work they are bringing to the table despite the country, at times, grappling with issues like censorship and not so rich creative culture. “However, a lot of valuable time and airtime gets wasted on focusing on meaningless differentiation rather than meaningful distinctiveness,” says the ad stalwart with an air of finality.

advertising Spends on Covid-19 vaccination campaigns can be considered as CSR: MCA
1 day ago